Supported by the Creative Capital Foundation.

“Misbehaving” is a series of three female “performers” for intimate installations. In each tableau, a hybrid machine “being” performs: a kinetic, electronically controlled machine speaks with a visual voice of erratic physical gestures. As a combination of performance and robotics, they represent girls and women who disobey or resist expectations. Unlike machines designed for perfect job performance, these machines will declare their fallibility, impatience, approval, and disapproval through small gestural acts and (in “Translator”) embedded video sequences. In contrast to the precise technique and tireless efforts of a robot that plays chess or constructs automobiles, my robotic performers “act out” and misbehave. In these tableaus of protest and transformation, the machine is spirited, emotional, thoughtful, yet irregular.

Each intimate installation focuses on translating the “unseen” (data from proximity sensors) into tangible activity such as erratic movement or “incorrect” behavior. Like a theater with two stages, each “being” presents a visual conversation between competing equivalents: the physical machine’s behavior and its computer controlled “mind.”

Two of the performers are aluminum, mechanized pairs of 6 year-old girl’s legs fitted with shoes.  An electronic circuit and proximity sensors make them responsive to the presence of viewers. One pair (“Resist”) squirms on the floor in a way that reads as both sexualized and fearful. Another pair (“Protest”) stomps on top of a table loudly at unpredictable times.

The third piece, “Translator,” is a poetic meditation on the act of translating the language of non-verbal gestures and sounds. A robotic object fitted with a screen moves nervously, back and forth, between two opposing video projectors. Its movement is controlled by the viewer (using a hand cranked wheel) who must steer the sculpture to each projector to receive its “message.” As the robotic screen nears one projector, it “receives” one set of images and sounds. It then travels across the room to receive a different set of images and sounds. This “go-between” creates a narrative that is made up of broken parts received alternately from each side. Like a child caught between two feuding parents, a political mediator, or a mind which is alternating between two thoughts, the action of the “translator” reveals a story of fragmentation and unification as it reveals and breaks up the narratives received from the two opposing camps. 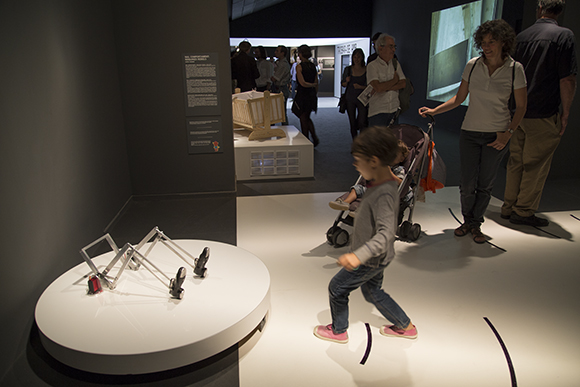 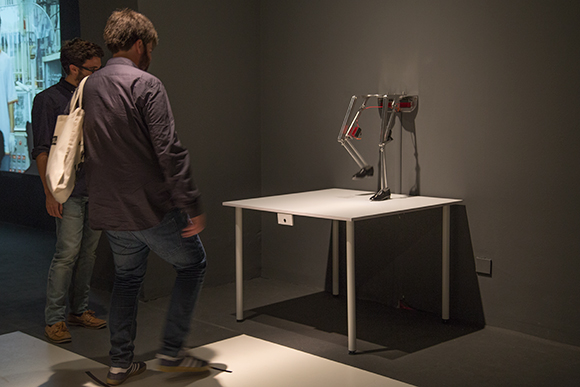 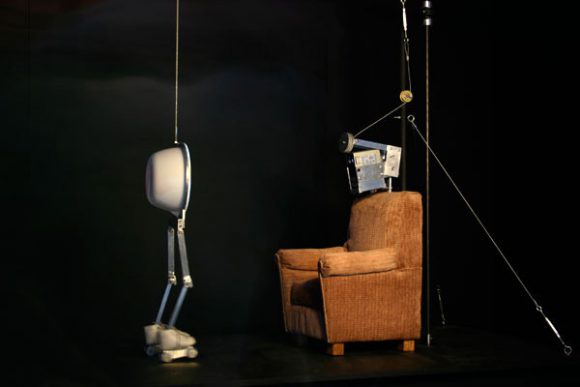